The Lay of the Land: Why Is a Wireless Site Survey So Important?

They’ve been around since the Egyptians built the pyramids thousands of years ago—and those things have held up pretty well.

Just like a land survey plays a critical role in planning and developing building projects, a wireless site survey is a necessary first step when designing and deploying secure WiFi. Here's why.

But here’s the problem: very few organizations have the in-house expertise and specialized wireless knowledge to conduct a proper wifi site survey. At SecurEdge, we have found that it takes a minimum of six to twelve months for someone with a Master’s level of education to be sufficiently trained in WiFi design—not to mention the years of experience it takes to really understand what’s going on.

Throw a rock at the typical IT department and you’ll be hard pressed to hit a single person who has the necessary wireless training and skill-set.

In addition to trying to do it yourself, another mistake is using the wrong site survey software and equipment. Lots of companies out there will try to sell you on DIY kits for performing your own wireless site survey or unrealistic data from manufacturers. But these cookie-cutter products and over-hyped information, falls short of factoring in your business’s unique specifications, wireless goals, potential obstacles, and real-world performance data.

When it comes to wireless solutions, our mantra is: design is everything. No matter how high-quality the products you're installing are, if your wireless network design falls short or grows obsolete, you will be met with slow, unreliable wifi, and frustration and complaints from your end users.

Let’s look at a real example from a client of ours that operates a hotel and resort.

In the guest rooms, they installed an access point per room and had them mounted vertically behind some furniture. Unfortunately, the access point model they used was a ceiling mount unit intended to be positioned horizontally.

When we were brought in, we surveyed the floors and found many RF signal deficient areas, including one floor that had a total of 88 access points installed. We ended up turning off almost 75% of the APs as well as reorienting several of them to improve the performance. 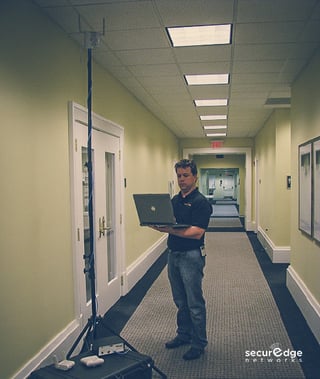 Having too many APs on these floors created a situation where channels were interfering with each other causing nothing to work. Once we reduced the access point count and made some other adjustments, the guests were able to enjoy a fast, reliable Wi-Fi experience, while the service staff were able to use their tablets to service the rooms with increased efficiency.

Had an experienced WLAN company been involved from the start to do a proper wireless site survey, our client would have had to only buy about a 1/3rd of the APs they actually purchased.

The opening of the hotel and resort would have occurred without the pains they endured for a month trying to use a non-performing system, and on top of that, they would not have had to pay twice to have a cabling company come back and re-run wiring and remount\relocate access points to their proper locations and orientations.

There are several types of WiFi site surveys, and where your business is on the wireless journey will determine which type is required. Working with a company that knows the differences, has the experience, and uses the right tools will directly impact your success.

From measuring the wireless signal from the various access points, to creating WiFi heat maps, to identifying RF interference and troubleshooting WiFi problems, a WiFi site survey is a requirement for designing a high-performing wireless network.

Wi-Fi as a Service

A sophisticated wireless network design, informed by a properly conducted wireless site survey, is just one part of the solution we offer at SecurEdge.

Even the best wireless network design will need maintenance and will grow obsolete within 3 to 5 years. That’s why we have bundled design, deployment, and Wi-Fi management services into a complete end-to-end solution available through a straightforward monthly subscription—known as WiFi as a Service (WaaS).

Other managed WiFi providers typically leave out the design aspect or get it wrong, but as we’ve discussed, this is the first and most critical step. We've developed a service that focuses on design so we know our systems will be fast, secure, and reliable every time. (Remember the SecurEdge mantra: design is everything.)

Our subscription service makes enterprise-grade WiFi networks more affordable and more reliable for businesses of all shapes and sizes to implement. We provide the infrastructure, software, and ongoing management to ensure every aspect of your wireless network is keeping up with the ever-changing needs of technology and your end users.

One major advantage of WiFi as a Service is that the same team of experts who conducted your site survey, designed your wireless network and deployed it, are also making sure it’s performing the way it was meant to using SLAs and real-time network monitoring.

Most businesses don’t have the budget to constantly upgrade their wireless network or to employ the staff with the necessary skill-set to correctly maintain optimal performance. Using WiFi as a Service means now you can.

Nobody likes a crooked pyramid, just like nobody likes a spotty WiFi connection. If you have concerns about your organization’s WiFi performanceor aren’t sure how to begin setting up an enterprise-grade wireless network, take a hint from the Egyptians and start the process of designing or fixing your wireless network with a proper WiFi site survey.