Should cell phones be standard technology in the classroom?

Should cell phones be standard technology in the classroom? 75% of teens between the ages of 13-17 carry cell phones. That is a staggering statistic for K-12 schools. Most schools today have a “no cell phone” policy but when you ask the school administrators about how they regulate the use of cell phones, almost all of them recognize it’s a policy that is difficult if not impossible to enforce.  Many of the IT Directors and CIOs we work with have seen a significant jump in the past year in how many Wifi-enabled smart phones (mostly iPhones and Android Phones) that have been trying to attach to the school wireless network. This is further proof that stopping the presence of cell phones in schools isn't possible.  So, if you can’t stop it, why not use cell phones as a platform for interactive learning in the classroom? 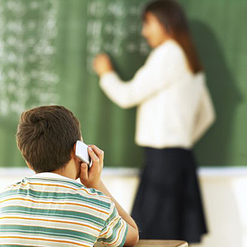 We see a few big challenges with using them as a learning device at this point:

1)      General Availability- yes, most students have phones, and the trend is towards smart phones with more processing power than we had in PC’s just a few years ago. But many students still carry flip phones, or other phones with no internet access.  It would be difficult to use a platform that a large % of the students don’t have yet.

2)      Web Content Filtering- the Children’s Internet Protection Act (CIPA) states that internet access being provided in K-12 schools use web filtering to protect the students from bad content.  Allowing student owned cell phones to access the web on the cell phone provider networks would bypass the web filtering services present on the school wireless network. This is the biggest limitation to using cell phones inside the classrooms that we see.

3)      The Distraction Issue- those opposed to cell phone use in the classroom point towards the fact that the average teen sends and receives 3,339 texts per month. That’s 6 text messages per hour awake or nearly 50 text messages during a normal school day. If schools promoted or allow cell phone use in the classroom, how do you control what the students are doing on their phones?

Many progressive teachers like Vicky Davis are making the case for cell phone use in schools. We believe the use of cell phones and mobile devices can be a great tool and are critical to the development of our learning systems. However, these challenges must be addressed in order to allow for a safe and effective learning environment for students.