Mobile Device Use and Your School's Bandwidth Problem [New Data]

Mobile Device Use and Your School's Bandwidth Problem [New Data]

Do you know how much time millennials spend accessing the internet from their smart phones these days? Is it 10 hours a week? 15? I can tell you that if they’re anything like me it’s a lot.

For many schools dealing with rising mobile device numbers and increasing user expectations and demands has become the norm.

Supporting secure mobility is hard. You have to understand your environment and implement the right system to support what you’re trying to accomplish.

To make matters worse many school wireless networks just don’t have the bandwidth to keep up with the speed at which mobile is growing.

In this post, I’m happy to share 3 simple but highly effective ways you can maximize your bandwidth to support the increasing numbers of mobile devices connecting to your school's network.

According to the “Connected Life study”, researchers found that on average millennials living in the United States spend a total of 21.7 hours a week accessing the internet from their smart phones; this is about 3.1 hours a day.

This particular study doesn’t just look at internet users (60,000 from 50 different countries) and their digital behaviors but also what they’re doing on the internet as well, finding that 76 percent are streaming online video. This is slightly more than the 71 percent that are using their smart phones to access various social media channels.

The below graphic from Statista bolsters the Connected Life Study by revealing how students feel about the current level of mobile device use inside the classroom. 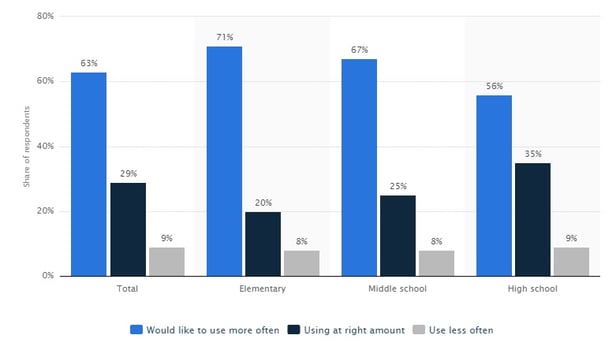 Bandwidth is hard to come by

From a budget standpoint it’s easy to see why, bandwidth costs money and its not always easy to upgrade. If you’re school is in a rural area the situation can be even worse because of the potential lack of infrastructure in place, making it even more expensive.

With bandwidth demands expected to increase by 50% year over year, what can your school wireless network do to maximize the bandwidth it already has?

3 simple ingredients to maximize your bandwidth

It’s a basic concept. Your campus has mission critical applications, for example, online testing and you have everything else be it streaming video, social etc. and they need to be prioritized.

Students watching Netflix shouldn’t take priority over a teacher trying to administer an online test or other students from accessing research materials.

In order to keep things fair and performing as they should, you need to create and enforce policies.

This can be done in many ways.

For example, allowing certain applications like Netflix or online gaming to have the lion’s share of your bandwidth from say 7pm to 6am and then during peak school hours only allowing mission critical apps or school related apps to take priority.

And it’s not limited to time of day; it could be based off of where the user is located, what type of device or the role they are assigned or the type of application.

This helps ensure everyone is happy, your teachers can be productive, your students can stay connected and the IT team doesn’t have to worry about potential downtime due to limited bandwidth.

Visibility is the king

How can you create and enforce policies if you can’t see what’s happening on your network in real-time. It might seem like an obvious strategy but often problems or poor WiFi performance is accompanied by lack of visibility.

The truth about wireless is that it’s not easy to detect what’s causing a certain issue and this is why you need as much visibility as possible.

It’s critical that your school WiFi network has the ability to identify, assign and then enforce the rules you create. Not only does your bandwidth depend on it but your network security and student data and overall performance does too.

Caching is another simple concept that gets overlooked when trying to optimize your campus WiFi network.

This tool can help you reduce the strain on your network when an entire class is trying to stream the same YouTube video at the same time.

Caching stores the data from the first time you accessed that content allowing anyone else to access it without having to pull it from the original server, decreasing the traffic and strain on your network.

I know it seems simple and it is, but it can free up a lot of bandwidth. Sometimes it's better to work smarter not harder.

It’s your job to figure out the most effective way to support both your user’s expectations and your school’s mission critical applications.

Knowing your teachers are happy and being more effective and seeing your students succeed is a thrilling reward for providing them with the connectivity they want.

It takes a lot of hard work, the right strategy, the right infrastructure and continuous planning to get there. We understand that budgets are never unlimited so you have to be strategic and well aware of what your options are.

If you have any questions regarding your campus WiFi network’s performance or have bandwidth questions please contact us here, we’d love to chat.