Like the gravitational pull of the moon affects the tides and surfers who ride waves of the  ocean, there’s an obvious swell in the popularity of wireless devices. Some research indicates that 87% of IT leaders consider their wireless network to be of a mission-critical importance. That’s the exact same network that wireless users are attempting to access with their devices.

(Yes, he's on a phone while surfing!)

Chances are they have been utilizing at least one wireless network to thumb through the applications on their wireless devices just prior to stumbling across this article. There is also a very high likelihood that they’ll be doing the same thing when they complete consumption of this content.

“Hang Ten” on the following figures; during 2013, 63% of Americans used their cell phone to access the internet. That study doesn’t indicate “how” users accessed the internet, but it would be interesting to see the number of people that accessed the internet with a wireless connection provided by their employer...though they probably wouldn’t provide that data if their names were attached during collection.

In any case, enterprises continue to expand their wired infrastructure to support use of those wireless devices (instead of burning through those expensive data plans) but of far greater concern is the applications that are running on those devices. Now more than ever, applications play a role in what users in education, healthcare and other enterprise-level environments are doing on a daily basis. Those same wireless devices that previously had only “personal use” associated with them, are now driving mission-critical applications and functions at work.

Like a 1960’s summer in New York, the mobile device industry is ripe with freedom and booming with engagement. Mobile now accounts for 12 percent of Americans’ media consumption time. Because we’re now constantly connected to our wireless devices, even the advertising industry has undergone a major shift in priorities. One advertising industry publication printed a study that shows the best way to reach consumers moving forward will be through mobile advertising - they are predicting an 83% growth, while trying to reach a consumer on their desktop or laptop in now a less than ideal investment. 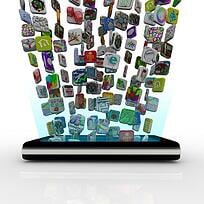 Applications have now become a revenue-driving force, as well as mobile search which is projected to bring Google $1.76 billion in revenue during 2014. One mobile application is hardly “mission critical” but chances are that as a working professional, you have accessed LinkedIn at one point or another in your spare time. In case you haven’t (really?), LinkedIn offers a place for professionals to connect and the engagement level is picking up - no longer is it “a place where jobs are posted.”

Industry leaders are now able to post content and provide their personal feedback as to the status of their specific marketplace. One great comment to a recent blog post was the following by Bennett Bayer, Global CMO & VP Strategy at Huawei Technologies:

“Mobile is all about the "3P's of Mobility" - Performance, Privacy and Personalization.”

So the data presented above makes it clear the direction in which we are going, but how can we be assured that we’re also getting the “3P’s of Mobility”?

To have “Performance”, you have to be prepared to support the number of devices that will be allowed to be a part of the wireless network. 802.11ac technology now available on the market is handling some of this concern, offering among other things, upgraded wireless connectivity. Ah, but beware the pitfalls of simply installing new access points boasting the new technology as bottlenecks could occur if the infrastructure can’t support your efforts.

To have the “Privacy”, certain advanced features will have to be implemented. By taking a look at a Next Generation Firewall from a manufacturer like Palo Alto Networks, you can give your enterprise additional protection against known (and even unknown) threats, especially when it comes to the applications running on your network.

With “Personalization”, clear policies must be in place when employees are connected wirelessly. Everyone has their issues with workplace efficiency from time-to-time but it might be helpful (depending on your policies) to have measures in place to prevent malware or spyware from infecting your network due to someone being lazy and/or careless.

Remember that with the increasing popularity of wireless devices, even the hackers have shifted their attention away from what’s wired and towards what’s popular - in hopes that they too might catch a big wave and ride it to accomplish their more sinister goals.

If you haven't already, it's time to start thinking about mobility. Whether you like it or not, you need to get your enterprise wireless network ready. If you have any questions or would like some advice on where to start, just contact us here. We are happy to help!