For even seasoned IT professionals getting the most out of your Wi-Fi can be very challenging. But like a lot of things, especially in wireless, we want them (most of the time need them) to work at the peak of their ability. When you try to envision even a modest wireless network today, it becomes clear that they have become full-on, living and breathing environments where everything is working together.

There are so many elements to consider that can influence your wifiperformance, from physical issues, to software issues and although frustrating, some things that are just out of your control.

Here are 5 of the most important elements that are ruining your Wi-Fi performance.

Usually backwards compatibility is a good thing and in a lot of ways it is, however, it can also be a source of poor Wi-Fi performance. For example, in addition to being slower to transmit 802.11b clients can’t see the higher rate of the new standards. These AP’s are then put into “protection mode” meaning they use control frames to get permission to transmit, which adds more on top of the process. A lot of times these older 802.11b units will be disabled to avoid this from happening.

We can’t mention antenna design without talking about power levels or the amount of power being transmitted by the AP. Power can be a somewhat complicated topic due to all of the different factors involved. A lot of the time what you might see on a datasheet might not reflect what's actually being transmitted. Many types of wireless network equipment comes with power control settings. It’s common for AP’s today to automatically detect the power level of other nearby AP’s and optimize their cell size to make a matrix of slightly overlapping cells. The problem here is that these auto settings tend to use lower levels than what’s needed, unfortunately causing coverage issues. It’s recommended to change the transmit power control range so the minimum power level is higher than the default. 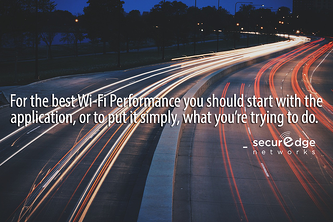 In a perfect world our wireless networks would transmit data at the fastest speeds possible. Unfortunately this is easier said than done, especially considering higher data rates are harder to transmit than lower rates. When a packet isn’t received properly, it’s not accepted by the transmitter and is forced to be retransmitted. A lot of the time the AP will go down to a lower data rate to retransmit the packet. A good rule to follow is to begin with a max data rate that is lower than the default max, this should cut down on having to retransmit packets.

In addition to physical components that might be affecting your wireless network performance there are also other types of factors such as channel assignments. As a common practice adjacent AP’s need to be assigned to different channels, if not they will basically hear everyone else and wait to talk to themselves, this is very poor use of capacity. For example, if you're using the 2.4 GHz radio spectrum, each channel is spaced at every 5 MHz and are 20 MHz wide which will create overlap. In the United States to avoid overlap you would want to keep adjacent AP’s on channels 1, 6 and 11 and really if you're using the 2.4 GHz band you want to use these three channels and only these three for your wifi.

When it comes to Wi-Fi performance these are just some of the elements that could be impacting your network. It’s important to realize the goal is creating the best environment possible and to understand that it starts with the application, or to put it simply what you’re trying to do.

Using customized application performance testing, wireless, network and security assessments SecurEdge has been helping schools, hospitals, industrial companies and retail businesses optimize their wireless networks for not only today's needs but also to establish a plan for tomorrow. If you would like more information about our performance assessments or need help with your next wireless network design,contact us here today.